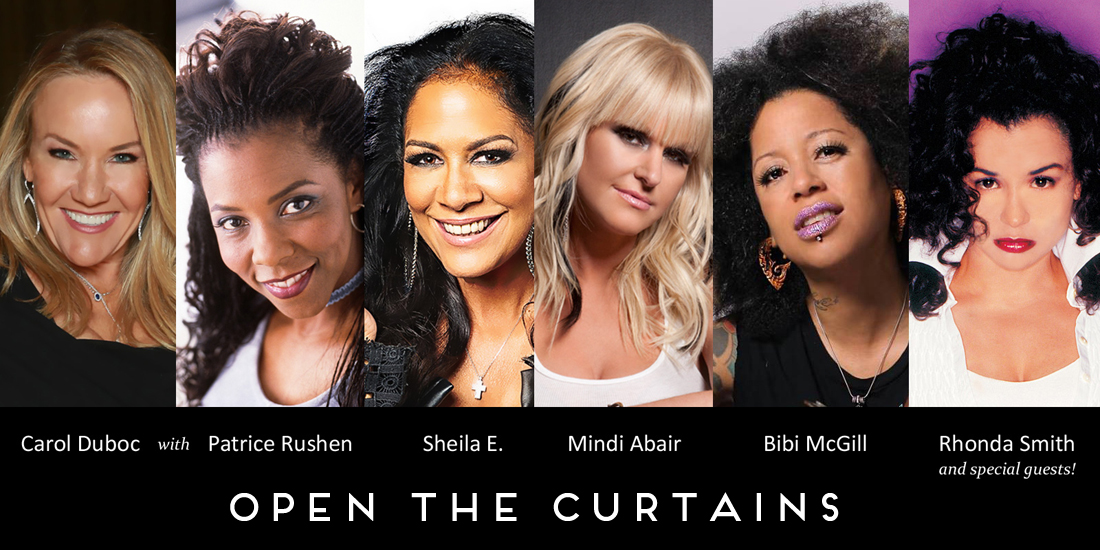 Acclaimed singer, pianist, composer, producer and engineer, Carol Duboc, celebrates the enduring power of women on her new and highly anticipated solo recording, Open The Curtains. Duboc, who has been first call for such heavyweights as Earth Wind & Fire’s Maurice White, Teddy Riley and George Duke, has assembled a star-studded line-up of musicians, who not only happen to be women but who are also some of the baddest musicians to grace this planet. As the title alludes, Open The Curtains, is the unveiling of a monumental musical movement that is sure to be met with a standing ovation. Recorded over a two-month span, Carol Duboc’s eighth album as a leader enlists an enviable cast of all-stars featuring percussionist Sheila E., pianist/vocalist Patrice Rushen, saxophonist Mindi Abair, guitarists Bibi McGill and Jennifer Batten, drummer Queen Cora Coleman, bassist Rhonda Smith and trombonist and singer Aubrey Logan. Collectively these women have collaborated with everyone from Stevie Wonder, Carlos Santana and Prince to Michael Jackson and Beyoncé, and beautifully carry Duboc’s message of female strength, wisdom and independence forward with grace, brawn and undeniable hipness. In a cookie-cutter industry, Duboc, has dared to chart her own musical path. Firmly rooted in the jazz and R&B traditions, she calls upon her rich reservoir of influences and conjures up a regal celebration exploring issues of self-empowerment and identity, love, loss and renewal.

While seven of the ten songs on Open The Curtains are originals penned by Carol, she chooses to pay tribute to a trio of women who have long inspired her – Nina Simone, Patrice Rushen and Peggy Lee. Duboc performs an unforgettable version of the Eddie Cooley/Otis Blackwell song “Fever,” which was one of Peggy Lee’s signature songs. Duboc transforms this chestnut and turns it upside down reinventing it as a cool shuffle swing. Trombonist Aubrey Logan adds a nice touch to the mix. “Peggy Lee was a songwriter, as well as a jazz singer, so this song seemed like the perfect choice.” Duboc reunites with the groundbreaking pianist, vocalist, composer and producer Patrice Rushen. The two recorded Wayne Shorter’s classic “El Gaucho” on Duboc’s second album Duboc (2002). It was not a hard choice for Duboc to select one of her favorite Rushen songs – the 1980s Top 40 pop hit “Forget Me Not.” “She is humble and kind, like an angel from God,” says the singer and pianist of her friend Patrice. “Everything she plays has feeling and she has a huge musical vocabulary drawing from classical, jazz and R&B. She just knows the right thing to play and when to play it. She really understood what I was trying to convey musically and it was a blessing and a joy to have her on this album!” Duboc dips into Nina Simone’s repertoire and serves up a splendid version of “Feeling Good.” While not a Nina Simone composition, it is one of the songs most often associated with the High Priestess of Soul. Carol says, “I spent a lot of time watching Nina Simone perform and ‘Feeling Good,’ struck a nerve in me. When she played piano and sang, she commanded everyone’s complete attention. She is exactly the kind of female jazz musician I wanted to give homage to on this album.”

Among Carol’s original songs on Open the Curtains is the triumphant, soulful and percussive “In Pieces,” featuring the undeniable Afro-Latin percussive funk of Sheila E. and the soulfully swooning saxophone of Mindi Abair. Inspired by a musical partnership that went awry, “In Pieces,” displays Duboc’s resilient spirit as she sings, “I’m not falling to pieces … I may get bent but never broken again.” “I’m a huge Prince fan and I am so saddened by his death, so for percussion I was ecstatic when I reached out to Sheila E. and she said, ‘yes,'” shares Duboc. “She is so musical and put all the right percussion parts on the tracks. It was devastating because Prince died the week following the recording of the album.” Saxophonist Mindi Abair is someone who Carol Duboc has wanted to work with for some time. “Mindi is by far one of the best sax players I have ever recorded and I have recorded them all!,” shares Carol. “She takes chances and is 100% unique. A true talent and everything a jazz musician should be.”

“Whisper” is a tender, meditative and emotive composition about an amicable break-up. Duboc’s cool, sweet and lilting vocals intertwined with Patrice Rushen’s keys, guitarist Bibi McGill, bassist Rhonda Smith and drummer Cora Coleman create a beautiful synergy that caresses every note from beginning to the end. “When I broke up with my husband,” explains Carol, “it was peaceful, almost friendly and I still loved him though we were so terribly broken.” Open The Curtains also features “Faces,” a personal favorite of Duboc’s. It’s a rockin’, high-octane and funk-fueled number that allows everyone to cut loose and strut their stuff including guitarists Jennifer Batten and Bibi McGill, who was Pink’s musical director as well as Beyoncé’s for eight years. “Bibi’s solos are melodic and intense. Not to mention she is a beautiful person inside and out and an expert Yoga instructor. Talk about keeping yourself centered.”

The Female Phenoms kick it up a notch with the invigorating and dance-inducing “Miss You Missing Me.” This song will never be ‘just another memory’ as the song says, as it is one of the album’s highlights. Queen Cora Coleman serves up some serious rhythmic magic on this track and throughout the album. Carol shares, “My dad was a drummer so I have listened to every drummer from Buddy Rich to Harvey Mason and of course I have recorded with Vinnie Colaiuta numerous times, but Cora is unique! She looks forward, straight ahead and poised as if nothing is happening while she rips around her toms. WOW, give me a break! And she is so funky. I totally understand why Prince toured with her and Beyoncé chose her for her all female band.” The sultry R&B ballad “Precious,” featuring Mindi Abair’s ethereal soprano sax is a sublime R&B ballad about a love that is perfect and precious. Duboc’s pure vocal quality and impeccable phrasing shine brightly. It is one of Carol Duboc’s first compositional credits. Chanté Moore originally recorded it in 1992. The bluesy “I’m Gone,” brings Open The Curtains to a rousing finale. Opening with Stevie Wonder-esqe harmonies, “I’m Gone,” is a funky and groove heavy tune that finds Duboc laying down the law and moving on. The track features some gritty guitar work from Jenny Bitten. “Early on in my career, my first producer was Michael Jackson’s producer, and my first record deal was given to me by Larkin Arnold who oversaw Michael’s Thriller album at Sony! So reaching out to Michael Jackson’s infamous female guitarist was a must. Jenny did not disappoint. She took a few hours off from her busy touring schedule to play two solos and I feel BLESSED! She is gifted!”

Hailing from a musical family in Kansas City, MO, by the time Carol Duboc was four she was already dazzling family members with performances of the entire musical My Fair Lady. By five she was playing the piano and it was not long before she began studying the saxophone. Her father, who was a drummer, introduced her to a lot of music including Lionel Hampton and Frank Sinatra, who were frequently playing in the house. Duboc, went on to join the Kansas City Performing Arts Company as a singer and actress. Incidentally, the Renaissance woman actually made a cameo in the 2005 film Be Cool starring John Travolta and Uma Thurman! Duboc eventually relocated to Los Angeles to attend U.S.C.’s School of Music as a double major in composition and vocal performance and a minor in music engineering, which led to numerous collaborations recording with various artists. Carol Duboc had the distinction and privilege of working alongside founder and leader of the legendary Earth, Wind & Fire and was in fact once signed to his label. Singer Deniece Williams whom Duboc credits as another pivotal influence collaborated with White in the 70s. “People used to say I sound a little like her and so I learned some of her songs while I was still in college,” recalls Carol. “I met her backstage at the Hollywood Bowl years ago, the biggest bit of advice she had for me is to put God first. I think I just now really get that!”

In addition to her own solo career, Carol Duboc has composed songs for a stellar list of artists. “It is amazing that when you say you are a writer and you are a woman, people assume you are just writing the lyrics,” bemuses Carol. “I never just write the words even when I collaborate. Often they assume the guy you are working with is doing everything. This is never the case with me!”

Duboc has written songs for everyone from Patti LaBelle to Chanté Moore and Stephanie Mills. Launching her own label Gold Note Music, with distribution through Orchard and City Hall Records, Carol Duboc, made her recording debut as a leader With All That I Am in 2001 and Duboc followed in 2002. In 2005 she released her third solo effort All of You, followed by Songs For Lovers in 2008, Burt Bacharach Songbook in 2009 and 2013’s Smile. In 2015 Duboc released Colored Glasses with her friend and keyboardist Jeff Lorber.

Open The Curtains is about standing in your brilliance and owning your place in this world. It could very well be the musical soundtrack to Dr. Maya Angelou’s “Phenomenal Woman,” as Carol Duboc orchestrates a tapestry of uplifting, introspective and empowering anthems. Duboc, considers herself a composer first. Her wide reaching influences are a dynamic aspect of her music but no matter what she writes, there is one constant – great grooves and memorable melodies. “I am always writing something,” says Duboc. “If I am out and I get an idea I will write the melody down and sketch it on whatever I have. I have files full of napkins and scratch paper with bass lines or melodies on them!” The music featured on Open The Curtains derives from a very personal place. “During the time when I was working on this album my nine year old daughter wrote her first song and shared it with me,” explains the Los Angeles based musician. “It was so touching because in her lyrics she said she wanted the Universe to see her as important and she wanted to feel loved. After hearing her song I immediately thought ‘Open the Curtains and shine! Honey, you are important!’ I want her to remember that her gift comes from God and that staying humble and putting God first no matter what is the most important thing in life by far.” Duboc and her daughter were able to come full circle as they recorded the compelling track together. The lyrics to the inspiring album opener state “Open the curtains, let us hear your voice … as long as it is your choice!” 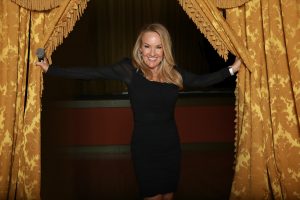 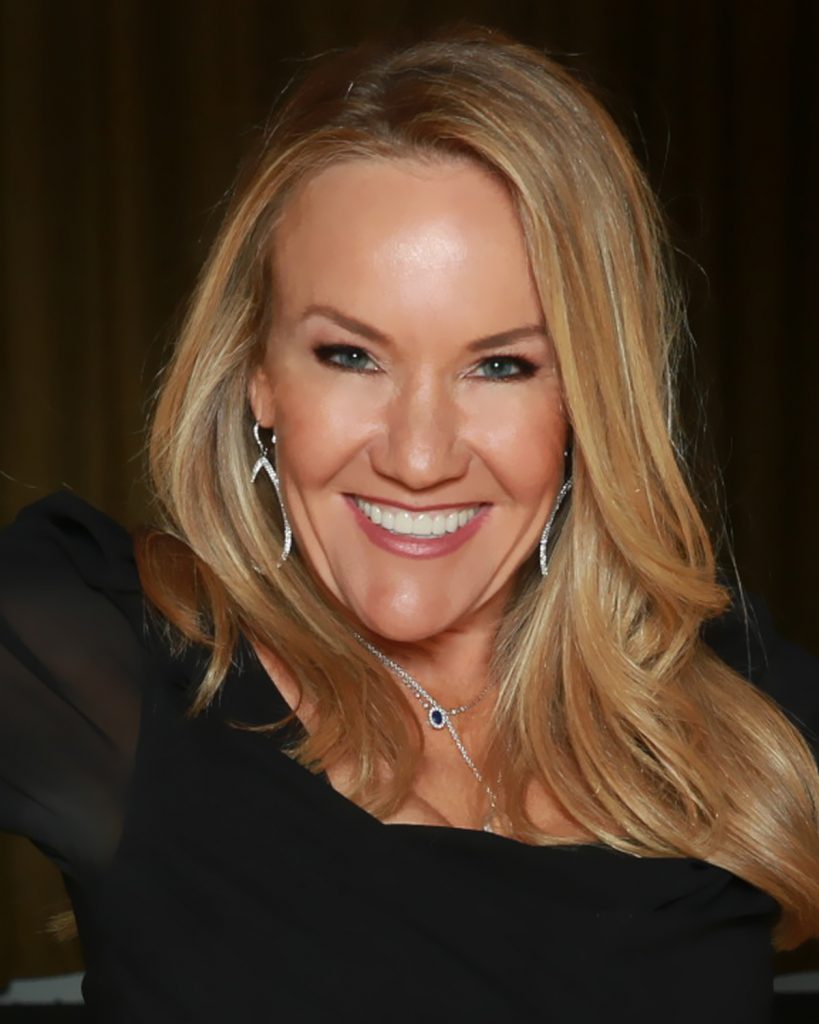 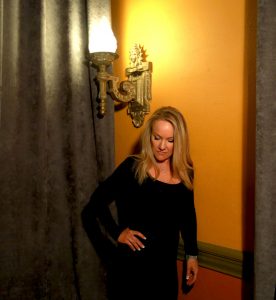 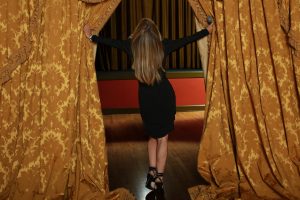 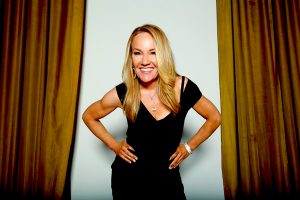